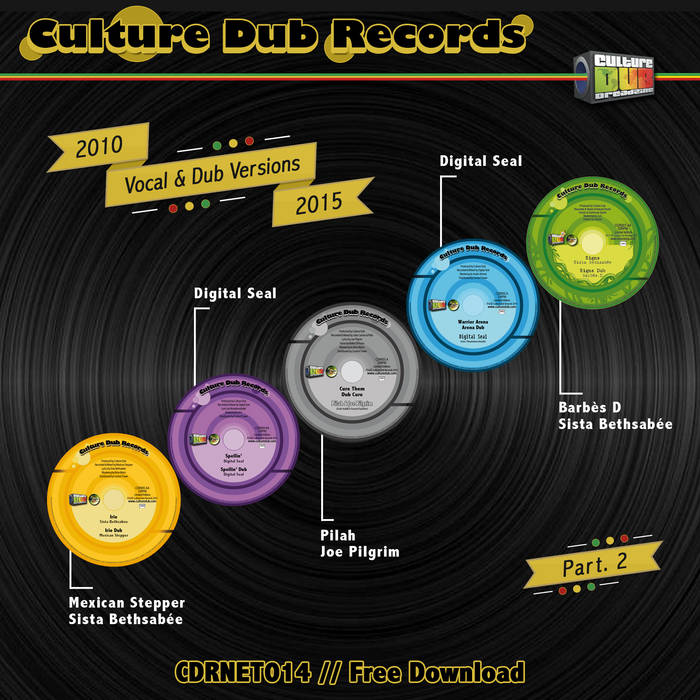 For the first time in digital format, you will find on "Culture Dub Records - Vocal and Dub Versions - 2010 / 2015 - Part 2 » an extract from each of 5 Culture Dub Records’ vinyls, included the singing and dub versions !

After 10 years of activism, Culture Dub Records created its own label in 2010 and released a first 10’’ vinyl, which is such a beautiful collaboration between the dubmaker Barbés D and the singer Sista Bethsabée. For the past five years, 5 vinyls have been produced by Culture Dub Records with Dubbers who came to the famous Nuit Du Dub organised in Poitiers!

you will find or discover original productions from Barbès.D, Mexican Stepper, Pilah and Digital Seal Hi-Fi, accompanied with true voices of Joe Pilgrim and Sista Bethsabée. These talented artists demonstrated aesthetics and musical colours, showing that Dub music does well from Roots, to Stepper, through Digital or tinged Electro and Bass Music !

For the Dub addict and collector, you can always order Culture Dub Records’ vinyls on Control Tower Records website : controltower.fr/fr/ !